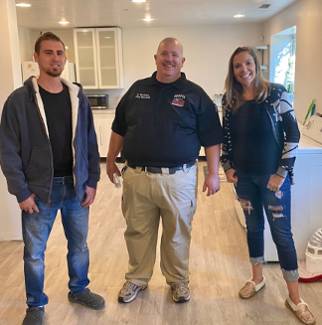 Earlier this month, NFPA learned about a  that embodies the true spirit of collaboration as it relates to fire and life safety.The story takes place in Draper, Utah where the  was recently asked by the Grossinger family to help with a wildfire mitigation project around their home. According to local news reports, as the department began working, they noticed something amiss: the home’s sprinkler and smoke alarm systems needed updating. But this was not a typical upgrade – it was something a bit more special because the parents and the older daughter in the family are deaf and have been reliant on their younger son who can hear, to alert them when the smoke alarms sounded or if there was a fire in the home.Recognizing the seriousness of the situation, the Draper Fire Department immediately reached out to area partners who agreed to provide special smoke alarms that visually flash to alert deaf occupants, and to work on repairing and updating the home’s residential fire sprinklers. Soon after the initial contact from the fire department, the companies began work in the home.The service project was organized as part of  (FPW), which ran from October 4 – 10. According to Draper fire officials, the project was intended not only to serve as a reminder for other homeowners to review their own fire safety measures during the week of the campaign, but to do so all year long. As part of the project, the department provided information and tips related to this year’s FPW campaign theme, “Serving Up Fire Safety in the Kitchen,” to help raise awareness of the common causes of home cooking fires and ways to prevent them.The story of the Grossinger Family is a heartening one, and one that reminds us that the work we do for Fire Prevention Week is important to the security and well- being of communities everywhere. As fire safety advocates, it is crucial that all of us recognize and take full advantage of the campaign not just in October but throughout the year. Thanks to the hard work of the Draper Fire Department and their partners, individuals and families in Utah and beyond are inspired to become their own advocates for, and embrace their personal role in, this important system of safety.Learn more about the  campaign, and get tips and resources to help keep your family safe from fire by visiting .